Meet Alison (aka alison41) from Cape Town in South Africa 🇿🇦. She’s a very enthusiastic postcrosser in her country, and a fan of books, writing, and mahjong! She has sent us quite a few interesting postal-themed articles over the years, and regularly updates us on the postal situation in her country… so we thought it was time we got to know her a little better. Here she is! A local magazine “IDEAS”, featured a 2 page article with pictures, about Postcrossing — at the sight of the international stamps and Par Avion stickers, I was immediately interested! I love receiving mail. I’ve been a letter writer my entire life, and had literally dozens of penfriends over the years. I still have one or two, particularly an Australian lady, we still correspond — by now it has been nearly 50 years.

Apart from being an avid reader, and writing articles for my two blogs (Despatches from Timbuktu and The Booksmith) my other passion is playing Mah Jong. I have been playing the game for nearly 50 years. I learned in Rhodesia, during the early 1970s, and have been playing, and teaching others how to play, ever since. I run a small club in the retirement village where live. I found a couple of Asian themed cards to display next to my Mah Jong set.

Reading the biographies of the people to whom I’m about to send a card. As a writer, I find people and their lives intensely interesting. So I enjoy reading everyone’s profiles, because here you have insight into their personalities, likes and dislikes. Blue mailboxes and the red outgoing box at the Big Bay Post Office. The view from the post office balcony cross the bay to Table Mountain is stunning!

I love my cat-themed postcards, and have displayed some of my current favourites in front of my work table, so can see and enjoy them daily. I am a huge cat fan! But apart from my Cat Cards, I’m involved with Gonny in the Netherlands, and we have our own “story card” project, inspired by a post on this blog from September 2017 titled “Postcard Stories”, about a woman who published a book consisting entirely of stories written on postcards. I don’t think we’ll produce our own book, but we’re having a lot of fun!

Mexico! If you live in South Africa, then Mexico is a very far way foreign country; ditto Iceland and Greenland.

Regrettably not; South Africa has very few members, and it is a big country. I’d love to attend a local Postcrossing get-together… but I think for that to happen, I’ll have to organise it myself!

What else excites me? Going to the theatre; book sales; cats; current affairs; books and reading; my monthly writing group; attending monthly meetings of the University of Third Age – the speakers are usually professional people who come and speak about their field of expertise. I run a monthly Book Club meeting at the local library and I’m always delighted to meet other readers and chat about books. Ruan from South Africa has an interesting request on his profile: he wants to learn which are the cool (pop&rock) bands in other countries and asks postcrossers to talk about them. We think that’s quite a fun way to learn about music and other cultures, don’t you think?
Here’s what he has to say about his Postcrossing hobby.

I first read about Postcrossing in a local stamp collector’s magazine, and then forgot about it. Months later I remembered again, and thought I’d just have a look to see what all the fuss was about. Well, I got 100% addicted straight away! I love the randomness of the project – to hold in my hand an object chosen specifically for me and sent halfway around the world by a stranger; and then to return the favour. It’s great to be able to exchange ideas and information with people you would propably never meet.

I also collect stamps, I have a large music collection, do a bit of gardening, and when the mood grips me, I imagine myself to be an amateur artist.

This is the post ofice where I do all my postal bussiness. This is the posting box where I send all my cards and letters. And this is the mail collection point where I receive all my mail. I have circled my box. At first, I kept all my received postcards in a box, sorted by country. We are now busy putting a selection of interesting cards up on a wall in the passage, hoping to have the entire wall covered soon! If I had to try to pick only a few favourites, I’d still end up with almost a hundred! So thanx to all the wonderful people in the Postcrossing community whose thoughtfulness never ceases to surprise me.

Postcards from the World Cup

Every now and then we receive stories from our members which makes us smile from ear to ear. Today we want to share with you one related with the current football World Cup. Here’s what Liesel from South Africa told us:

I would like to tell you how my daughter, Meghan, made a friend through Postcrossing and got to meet her thanks to the 2010 FIFA World Cup currently taking place in South Africa. Both my daughters and I are avid postcrossers and when we are not busy sending and registering postcards, we like to browse the website searching for favourites.
While browsing the South African postcards one day, we noticed that a lady called Linda, from Slovenia, really liked South African postcards and frequently commented on how beautiful they are. Meghan sent her a message asking if she can mail her one of her favourites and soon they had exchanged cards. Meghan loves horses and Linda sent her a lovely horse card. While corresponding Linda mentioned that she might be travelling to South Africa for the 2010 FIFA World Cup as part of a group of Slovenian soccer fans. We told her that we would love to meet her and kept in touch until she let us know that she is definitely coming. We were so excited! We had to wait until Linda’s tour group visited our home city of Pretoria (the executive capital of South Africa), which they did on Wednesday 16 June 2010. 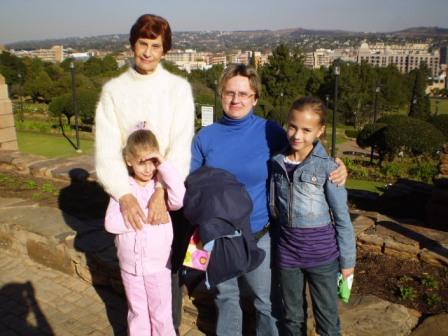 This day is a South African public holiday called Youth Day on which we commemorate the 1976 protests by 20 000 pupils against inferior education for black people.

Linda’s group visited several historical sites in Pretoria and we arranged to meet up with her at the Union Buildings. The Union Buildings is the residence of the South African Presidency and government. It was designed in 1910 by Sir Herbert Baker and completed in 1913. It has been the venue of many important events in our history including the August 9, 1956 march by women chanting 'strike the women, strike the rock’ to protest the pass laws under the Apartheid government. 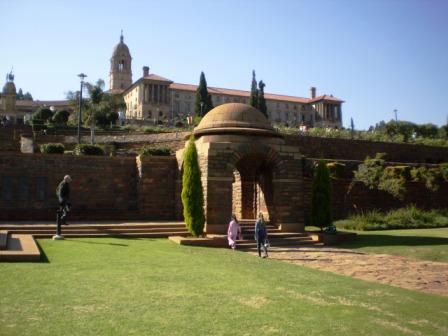 It was here too that former President Nelson Mandela was inaugurated as our first democratically elected President on 10 May 1994, heralding a new era in our history. Unfortunately Linda’s group couldn’t stay long, but we had enough time for a brief chat and to exchange gifts. Linda gave Meghan a Slovenian supporter scarf and Meghan gave Linda soccer memorabilia and postcards of course! 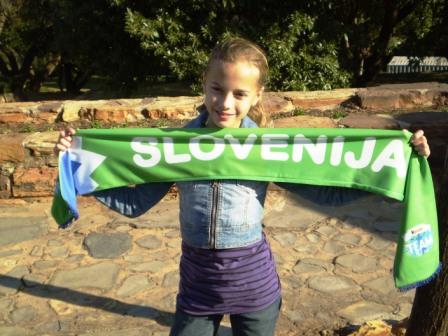 Meghan with scarf Linda gave her

It was a privileged for Meghan to meet Linda, a friend from Slovenia, something that would not have happened if it wasn’t for Postcrossing and the Soccer World Cup!

Thank you Liesel for sharing this with us!

If you have similar stories, we would love to hear them!

Ever found yourself looking at a postcard and thinking how life must be in that place? Or ever got curious about a country or a city and went online to find more about it? We know we do. Postcards allows us to travel to different places even without leaving our home.

Sandy (Shaneez) lives in South Africa and she decided to take traveling through postcards to a new level: go around the world in 80 days, through her postcards. The result of it is interesting blog very appropriately called Sandy, the Armchair Traveller.

In it, Sandy takes us through an imaginary trip around the world visiting the places where she has postcards from! All the stops include tons of details about them: photos, videos, links, curiosities, even local cuisine. But most importantly, plenty of imagination. And there’s even a map of the trip! 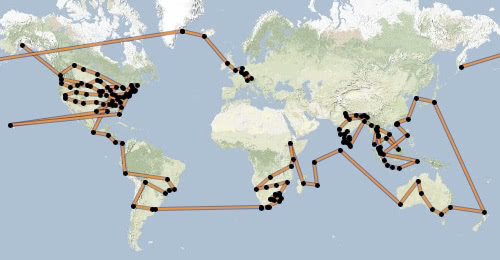 If you enjoy traveling through postcards, then make sure to stop by at Sandy, the Armchair Traveller.