Lately, Japanese Gotochi Cards are becoming quite popular and sought after among postcrossers – so we thought it would be fun to tell you a bit more about them here on the blog. Read on! Gotochi cards are designed and released by the Japanese Postal System, and each one of them represents a place in Japan – hence the name 'gotochi’, which means 'local’. They showcase Japanese symbols (which might be local dishes, costumes, monuments, landscapes, etc.) on a national and regional level, in a brightly coloured and fun cartoon. Gotochi cards have a couple of unique features that make them special. First of all, they are not perfect rectangles, but in fact take on the shape of their picture. Also, each card not only has a cartoon picture on it, but also the name of the place that is depicted in the image. Every prefecture has multiple cards, which might be one of the reasons that collecting them has taken off and became such a popular hobby! Some of the most famous Gotochi postcards include Kyoto’s Geisha’s and Ibaraki’s melons. You can check out the whole collection of cards on the postcard collection site.

Hope you enjoyed discovering the Japanese Gotochi cards! Which one is your favourite? :)

Note: While they are super-cute, please bear in mind that they are also more expensive to send than normal postcards – and so it is hard for Japanese postcrossers to send a lot of them.

The Little Mail Carriers have once again written home… from the far east! Turns out they’ve been enjoying the mild winter days of Okinawa! Read all about their adventures on this post from their host cbayha.

Greetings from sunny Okinawa, Japan! Did you know that there is a subtropical island that is part of Japan? Actually, the Prefecture of Okinawa is made up of hundreds of small islands, the largest of which is Okinawa Island. There are palm trees here, and they grow tropical fruits, like pineapple!

A long time ago, these islands were an independent nation, called the Ryukyu Kingdom. The kings and noblemen of the Ryukyu build many beautiful castles and because of this, 9 of the 16 UNESCO World Heritage Sites for Japan are on Okinawa. Our first outing was to the Katsuren Castle, which is a UNESCO World Heritage Site. It was a beautiful day, sunny and warm! The castle sits way up on top of a hill, with a view of the ocean on either side. We were pretty tired after we hiked up to the top! Down at the visitor’s center they have built a model of the castle that was just the right size for us. The people of Okinawa are very creative! They are famous for their pottery and hand blown glass. We took a trip to the southern end of Okinawa Island to visit the Ryukyu Glass Village. There we met this ferocious looking shisa. Don’t be scared – Shisa are Guardians. They protect buildings from typhoons, which threaten the island every year. Legend has it that a clay shisa, much like this one, once came to life and saved the island from a horrible storm. Now almost every building has at least one shisa (but usually a pair) guarding them and protecting them from the storms. After watching the artisans at work, we admired the beautiful glass tile wall that is one of the main attractions. Okinawan glass is very colorful. The glass is not the only thing that is colorful on Okinawa! The Okinawa sweet potato is bright purple on the inside! It is very nutritious and tasty and everyone’s favorite way to eat it is as cake! Sweet potato boats are the most popular present for tourists to take home with them from Okinawa. At the bakery we got to sample different varieties of sweet potato sweets, and watch how they are made. We also met another shisa! This guy was very happy and relaxed. He was taking a break from his regular duties to eat a few sweet potato boats. What a day we had today! Today we went on a road trip to the Northern end of the island to visit the Okinawa Churaumi Aquarium. This world-famous aquarium is a must-see for anyone who visits here. The aquarium has lots of hands-on exhibits for children, a sea turtle exhibit, a manatee house, a great dolphin show and one of the largest aquarium tanks in the world! The Kuroshio sea aquarium has a capacity of 7,500 cubic meters and houses giant manta rays and whale sharks! We had lunch in the cafe along one side of the tank and watched all the big fish swim around. After that we headed outside for the dolphin show. We were very happy, because it’s winter on Okinawa, so we didn’t think the dolphins would be out performing. But they put on a great show and we loved watching them leap in the air. If you look beyond the dolphins, across the bay, you can see an island. That is Ie Island. On Ie island they grow peanuts and flowers! They host an annual Lily Festival which is supposed to be amazing, but we are visiting at the wrong time of year. Maybe we’ll come back some day to see all the flowers in bloom!

Thank you cbayha for this great travel report! The adventure continues…
Posted by meiadeleite

Few events can unite the whole world such as natural catastrophes and the recent events in Japan have left no one indifferent. In the last days our thoughts are with those in Japan going through the hardship of a 9.0 earthquake and the devastating tsunami that followed.

We all feel powerless when such events are so overwhelming. But that is precisely why it’s important that we do do what we can to help recovering from this disaster. Below are some links we collected where you can make a donation to help recover from this desperate events.

By credit card through Google’s 2011 Japan Crisis website
In this page you are able to donate the Japanese Red Cross and to other institutions such as UNICEF, 'International Medical Corps’ and 'Save the children’.
Through bank transfer to Japanese Red Cross
Note that their website also recommends that you contact your local Red Cross for ways to donate. From their website:

“If you want to donate money to the affected population of earthquake and tsunami, please contact your national Red Cross/Crescent society, which may have already launched fundraising campaign within your country.”

Using Paypal Japan earthquake and tsunami relief website
You may donate to several different organizations through Paypal and they are covering all processing costs so 100% of your donation reaches the non-profit organization you choose.

Every donation, no matter how small, will surely help. Also a way that you can help is sending your support towards Japanese members using postcards. You may be wondering if your postcards will reach their destination in Japan. The Japan Post has published on their website that some areas are expected to have delays on the delivery. However, they are doing the best they can to deliver all the mail, even to those who might have lost their home, to whom they are making an effort to hand-deliver in person to those in shelters and evacuation centers – when such is possible.

We also received a report of a Japanese Postcrosser in the Fukushima area (one of the most affected ones) who was very moved by receiving a Postcrossing postcard hand-delivered to him by the mailman in the shelter he is at the moment.

So, please be extra patient with postcards traveling to Japan – even those traveling to areas that were less affected. Delays are expected. But remember that words of support and letting them know that our thoughts are with them is a way to help them go through these difficult times.


Edit: Google has a website with the addresses of the temporary shelters. Although this information is in Japanese only, you can find some details on how to interprete it at this forum thread

Have a break with... Kit Kat postcards!

In a partnership with Japan Post, Nestlé Kit Kat and advertising agency JWT have come up with a clever and innovative concept: the Kit Kat postcards! 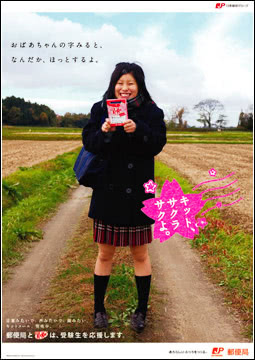 As the name suggests, these are small boxes of Kit Kat, that can be mailed as if they were a postcard. The product launch was timed with the university exams season, so that friends and relatives could wish students good luck in their studies with a chocolate break :)

The Kit Kat postcards won the Media Grand Prix this year at the Cannes Lions International Advertising Festival, so we wonder… how long until it is available at other postal services around the world? *hint hint* :)