The Little Mail Carriers have written home again! Turns out they’ve been enjoying a relaxed time in Tianjin, China! Read all about their adventures on this post from their host fitziane.

Ni hao, everyone, hello from China! We have spent a couple of lovely months in Tianjin, a dynamic city about an hour and a half away from Beijing. Our host family’s mom and dad work at an international school in China. She’s the elementary librarian and he heads the PE department. We spent our time living the expat life and enjoying family life. This is a beautiful forest in the mountains north of Beijing. There are quiet mountain paths and lots and lots of trees and plenty of wonderful fresh air. (Although we can’t complain of the city air. October is the best month for air quality in Tianjin and we had many beautiful clear days. Still, there’s no beating fresh mountain air.) Camping was a lot of fun, although a bit of work, especially for people our size. After setting up camp, we went exploring. The stream that ran past our camping site provided endless opportunities for splashing and wading. We didn’t get too wet, which was a good thing, because there was definitely a chill in the air in the shadows of the forest. Little Paulo, of course, had to swing from the trees like Tarzan and he kept looking at the water as if to calculate the size of the white water raft he’d need. Going back to the city was good. We were happy to spend time with our librarian friend at her school. So many eager students come into the library every day. Libraries are wonderful! During our month in the city, we did the usual tourist stuff. We went to Ancient Culture Street in Tianjin, among other places. This is a market that has grown around a Buddhist temple. About 5 years ago, the whole market was torn down and refurbished to give market vendors modern facilities, but the ancient character was kept. The market itself is very much a tourist site, with people come from all over the countryside surrounding Tianjin to visit. The temple was very busy, with many people lighting incense at the different altars. The best part of our trip, though, was camping at the foot of the Great Wall of China. The first week of October is a national holiday in China, as the country celebrates its founding anniversary. We took advantage of the holiday to go for a long weekend with 6 families and camp at Jingshanlin. The Great Wall was built by China’s first emperor to protect China from the Mongols in the north. The aim of the emperor was to have a wall stretching from Lop Lake in the west to Shanghaiguan in the east. It was to be 6 horses wide at the top and 8 horses wide at the bottom (or something like that. We read a book about it in the school library.) There were to be watchtowers every 100 meters. The emperor sent a million people to build it. Many died and are buried in the wall. The conditions must have been brutal. It took 10 years to build, but subsequent emperors built different parts of it. The part we were on, Jingshanlin, was built during the Ming dynasty, only 500 years ago.

Click here for more photos of the Great Wall from our host. We’ve had a great time in China and although we’re sad to go, we’re eager to continue with our adventures. We wish you all great happiness and good fortune. Thank you fitziane for this lovely report! Now we wonder where the little ones will show up next…

Postcrossing Spotlight: maroussia from France, but in China!

Maroussia, a French Postcrosser who lives in China and is collecting postcards since she was 12 years old.

I have collected viewcards and had penfriends since age 12, the cards always made me day dream about places I might never see with my own eyes and a penfriend of mine from Sweden (but actually Finnish) thought I would be interested and introduced postcrossing to me. I loved the idea, the mystery of where the next card will come from, and the opportunity to make new friends, to “meet” interesting people. I must say I have NOT been disappointed and I love postcrossing! To my happy surprise, 99% of the cards I have so far received have been good and valuable for my collection, and many came with really great words written on the back!

Yes, I am crazy about cooking and baking, and collecting cookbooks and cookery magazines, recipes. My favourite passtime is trying new recipes. My other “hobby” is history (which I teach along with geography), and reading history books and magazines, also archaeology, learning about people in other times and places, and postcards here come very handy and are a real help. Many cards I received are directly linked to historical events and it is very thrilling.

I live in a village 30 km from the city and mail deliveries are not reliable where I live, to say the least. So I receive my letters and cards in that 1–2–12 box in the photo which actually is my husband’s office mail box in the city, where mail is delivered safely. 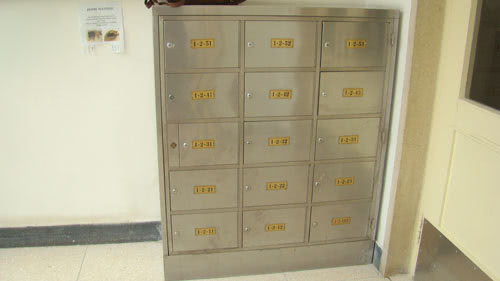 This is the one I mostly patronize when I have to send things a bit out of the ordinary like packages or registered letters. Otherwise I mostly drop my cards in that post-box in San Li Tun street, but occasionally in other ones. I know the location of about ten convenient mail boxes. 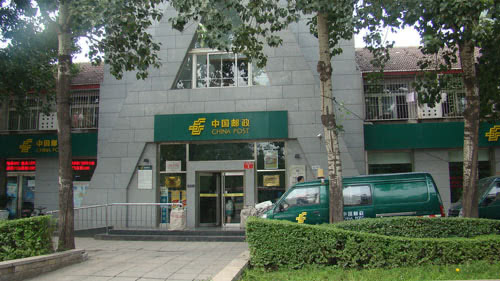 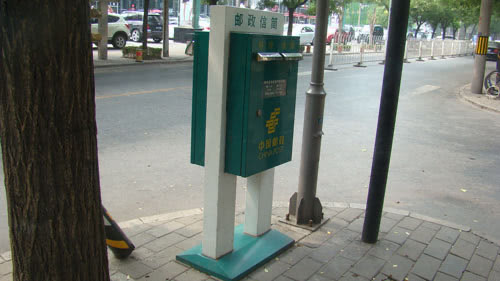 Well they are quite messy, but at least organized by countries. In boxes for the countries from where I have really many like Germany, France, the Czech Republic, the USA, Austria and such. The others are in two chests of drawers, also classified by country. My big hope (when I am retired, maybe) is to put them all in albums, with explanations about the place shown on the card! 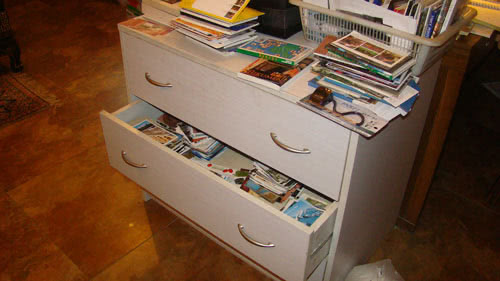 Hard to tell! There are so many I particularly love either because the picture is really fantastic, or because I love the place or it makes me day dream…

As some of you might have noticed, Postcrossing closed the Paypal “donation box” for the Sichuan Earthquake relief fund a few days ago.
We took some time to mail all the postcard packs to the generous donors and today, exactly a month after the earthquake, we headed to the bank and made the deposit: 12289.2 RMB (or 1149.2 Euros or 1776.4 U.S. dollars) . 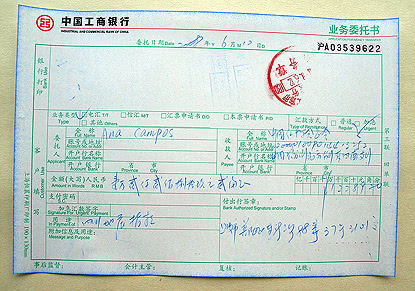 PS – If you would still like to make a donation, please do so directly to the Red Cross, through the numbers on this page.

To help the victims of the Sichuan earthquake, Postcrossing is raising donations which will be sent to the Red Cross society of China. As a bonus, we will send a set postcards to the first 100 people who donate over 15 US dolars or 10 euros.

For more details, please visit the Sichuan Earthquake relief page we have set up.
All help is appreciated. Thank you!
Posted by meiadeleite