Have you heard of Owney the dog? This dog was a postal sensation during the late 1880s to the 1890s. Of course, he’s still popular today but not as popular as he did during the climax of his career.

One day in 1888, a stray dog wandered into a post office in Albany, New York. The postal workers took the dog in for the night and the poor, little fella fell asleep on a pile of sacks which were used to carry mail. During the next days, the postal workers decided to keep him and gave him his very own mail sack to sleep on.

Some accounts claim that Owney became so familiar with the scent and texture of the mail sacks that he followed one wherever it was taken. Another account says that Owney’s sack was needed one day and Owney followed its scent as it was brought into a postal train. Whatever the real story was, Owney’s career as the Post Office’s mascot was launched through his love of mail sacks. 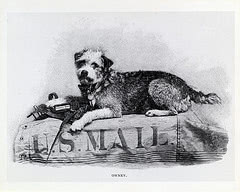 Owney would follow the mail sacks onto mail wagons, mail trains, and even mail steamships! Soon, the wonder dog was traveling all over the United States and the world!

In 1897, Owney died of a peaceful death. Through the various fundraisings performed by his friends and fans, his body was preserved and immortalized as an inspirational display – first at the Washington, D.C. headquarters of the United States Post Office (USPS) and then at the Smithsonian Institution.

If you’d like to see more of Owney, he’s quite popular on Flickr. There are a few postcards with Owney’s image on them and these can be new ideas for your next postcard mailing!

I had never heard about Owney! Thank you for sharing this nice story with us.
Posted by Geminiscp

We love dog stories even though we always bark at our letter carriers. Can you believe we are just barking hello?
Posted by BruceTheDog on 29 Apr, 2009

I've never heard about Owney, either! That's very interesting - thanks for posting it!
Posted by Lori45P on 29 Apr, 2009

Great article, and cute dog. Where can I order some of the postcards of Owney? I tried the sites that you posted with no luck.

You can see Owney at the National Post Museum in Washington, DC. The museum also has lots of postcards with him on it.
Posted by juliaF on 8 May, 2009

I saw Owney pictures.
"The real Owney" via Smithsonian Institution on Flickr.

If you would like to check this are the paths


He is amazing dog.
He is my hero.