Early last year we mentioned a project called Dear Data, in which two ladies across the Atlantic exchanged drawn infographic postcards every week, detailing one specific aspect of their lives. Things such as complaints they uttered or compliments they’ve received, or even very specific things like animals they saw or doors they went through were all counted and sketched into white postcards, and then posted to each other. They kept it up for a whole year, collecting data and turning the experiment into a weekly ritual of discovery.

The project was so popular that it didn’t surprise me to discover it was edited in a book format recently, and I think it’s even better to browse the postcards this way, in an analogue format equivalent to that in which they came to life.

The postcard images remain intriguing and unreadable at first glance, inviting further investigation in order to decode them. The legends on the back though are super detailed and often contain several layers of information to add to their complexity… it’s astonishing to realize how much data they must have collected over the year! The pages in-between postcards are also funny and often provide insights or little anecdotes into Stefanie and Georgia’s lives… like how they both discovered their love for Haribo gummy bears on week 17!

Slowly, throughout the book, you also realise how a conversation is happening between the designers through their correspondence, how they’re getting to know each other and thinking a bit more about their lives through the analysis that is taking place in real time.

All in all, Dear Data is a remarkable book, inspiring us to slow down and really observe what is happening all around… and then grab our pens to put all these interesting details into our postcards! PS – Sadly, it’s also very noticeable on the book how badly US machines treat their outbound mail… Why, USPS, why?! 😠

Letters to My Future Self + Giveaway!

Remember the World’s Smallest Postal Service (and their fantastic DIY activity kit) which we mentioned here on the blog some years ago?

Lea Redmond and her company have been busy creating lovely new things in the meantime, and we’re here to tell you all about one of their more recent ventures — a book of letters which you write to yourself, to read in the future! 😍 The “Letters to My…” are a series of themed books, each containing 12 paper time capsules (which are a set of 12 aerogrammes bound together in a hard cover). There are several themes to choose from, from letters to your “older and wiser” self, to your baby, mom or dad, grandchild, the bride…

On the Letters to My Future Self for instance, each letter features a prompt such as “things you never want to forget” or “promises you made to yourself”. As inspiration strikes, you write down these memories or pieces of advice on a letter, which you then seal with a special sticker and save for when the right time comes. We’ll let Lea show you how it works:

Each aerogramme is beautifully designed and the thoughtful prompts encourage us to sit down with our thoughts and plans for a little while, inviting reflection and appreciation.

We’re truly enamoured with this simple yet genius idea. Wouldn’t they make perfect gifts for snail mail lovers? We think so too, which is why we’re super excited that Lea’s company Leafcutter Designs shared some of these with us — so we can share them with you guys!

We have 2 copies of Letters to My Future Self to give to two lucky postcrossers who answer the following question in the comments: If you could write one short piece of advice to your future self right now, what would you tell yourself? Good luck everyone — remember to check back on this post around this time next week, to know whether your name was picked by Paulo’s random number generator. And a big thank you to our generous friends at Leafcutter Designs, for sponsoring this giveaway! 😊

And the winners, as chosen by Paulo’s random number generator are… otegami and ravioli22! Hurray! Thank you everyone for all your interesting comments and precious words of advice! The Englishman who posted himself and other curious objects

We’ve already told about the artist who spent several years mailing himself strange unwrapped objects. But it seems that the hobby of mailing oneself quirky objects through the postal services has antecedent roots, as writes John Tingey on a newly published book. “The Englishman who posted himself and other curious objects” is the story of a 19th century’s man and his passion for the postal services and their quirkiness. Here’s the synopsis:

The first impression of W. Reginald Bray (1879–1939) was one of an ordinary middle-class Englishman quietly living out his time as an accountant in the leafy suburb of Forest Hill, London. A glimpse behind his study door, however, revealed his extraordinary passion for sending unusual items through the mail. 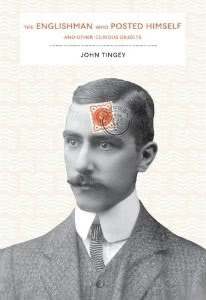 In 1898, Bray purchased a copy of the Post Office Guide, and began to study the regulations published quarterly by the British postal authorities. He discovered that the smallest item one could post was a bee, and the largest, an elephant. Intrigued, he decided to experiment with sending ordinary and strange objects through the post unwrapped, including a turnip, a bowler hat, a bicycle pump, shirt cuffs, seaweed, a clothes brush, even a rabbit’s skull. He eventually posted his Irish terrier and himself (not together), earning him the name “The Human Letter.”

He also mailed cards to challenging addresses some in the form of picture puzzles, others sent to ambiguous recipients at hard to reach destinations all in the name of testing the deductive powers of the beleaguered mail carrier. Over time his passion changed from sending curios to amassing the world’s largest collection of autographs, also via the post. By the time he died in 1939, Bray had sent out more than thirty-two thousand postal curios and autograph requests.

The Englishman who posted himself and other curious objects is available at Amazon.com
Pray tell, what was the strangest thing you’ve ever posted? :)

Letters of note is a site that gathers fascinating and entertaining letters, postcards and other mail items. They’re special for a number of reasons, but one way or another have gone unnoticed until now.

For example, remember the movie Who framed Roger Rabbit? It was groundbreaking at the time because of the way the animated characters acted seamlessly with the living characters of the movie.

The following memo was send by RIchard Williams, the movie’s director of animation to all the people working on the animation department: 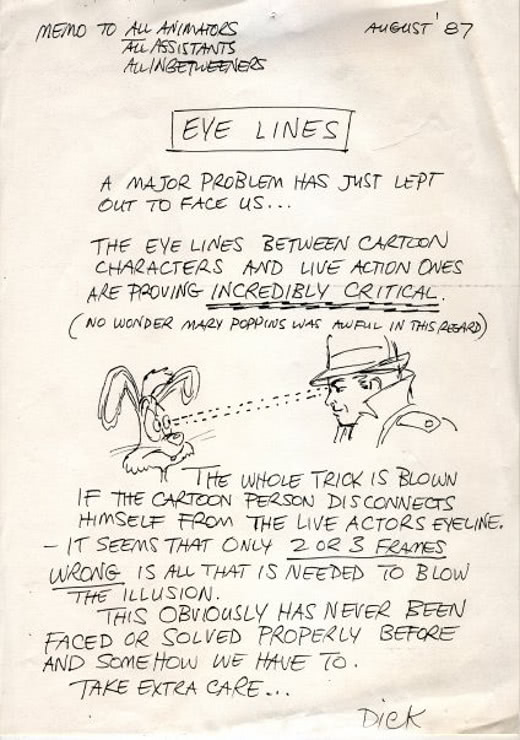 Isn’t it precious, now that we know that they’ve achieved this effect so well? This, and many other wonderful examples, on lettersofnote.com.